Of course, to earn the right to represent Western Visayas region, they defeated all participating teams in the regional version of the volleyball league.

By the way, the team grabbed the championship in the Western Visayas PRISAA meet held 8-13 January at San Jose, Antique.

The recent Shakey’s Girls’ Volleyball League Tournament of Champions was participated in by the country’s best, the champions of their respective regions. 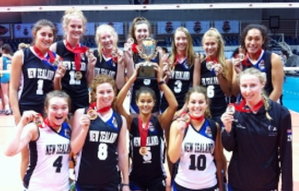 The teams from New Zealand and Australia made the league more challenging for our young netters.

CPU made it to the semi-finals and battled the New Zealand team for bronze.

While the CPU team didn’t make it to the final three, I’m sure their participation made an impression. They are a strong team.

We have a National Champion Team in the making. All CPU needs to do is strengthen support in all aspects.

The wonderful thing about winning national and international sports competitions, like volleyball tournaments, is the university gets good publicity and promotion.

I’m sure the teams and the audience as well, know now that there’s a school named “Central Philippine University” in Iloilo City, Western Visayas, Philippines.

Definitely, our sports ambassadors deserve the best from our Alma Mater, isn’t it Centralians?