The G-Force, compose of some staff members of Central Philippine University, went on a two-day discovery 2011 at Tibiao, Antique on May 26 to 27. 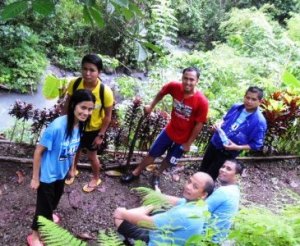 Resting a bit before leaving Bugtong-Bato Falls to go back to Brgy. Tuno. The G-Force appreciates the presence of Flord (red shirt) and Krista (yellow shirt) who guided their trek.

Their second day at Tibiao was an intensive adventure day for them. Early morning, the G-Force went to witness the fisher folks bring in their catch from their Lambaklad nets. They had fun at Bugtong-Bato Falls. Read previous post, “Katahum Tibiao Tours – Lambaklad Fishing, Bugtong-Bato Falls, Kayak Adventures & Hot Bath“

It was already noon time when the G-Force finished their trip from Bugtong-Bato. They proceeded to Kayak Inn, the venue for their next activity… Kayaking.

After a hearty lunch, three G-Force members don the kayaking attire. Cyrus decided to rest, while Jonan soothed his tired body at the Kawa hot bath.

Beneath the smiles of the G-Force Kayakers, a mix of excitement and eagerness pervaded their spirit. The walk to the training site added to the suspense. 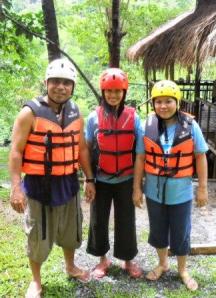 Jones, Joan, and May were the three G-Force who went Kayaking. 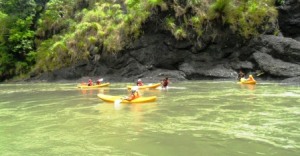 The Kayak neophytes were brought to Grade 1 (still waters) for orientation and quick training. 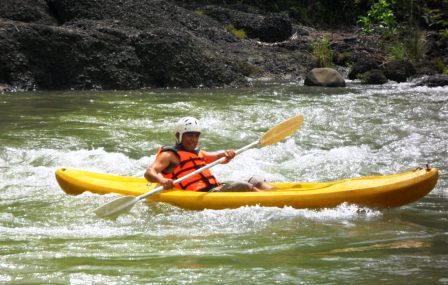